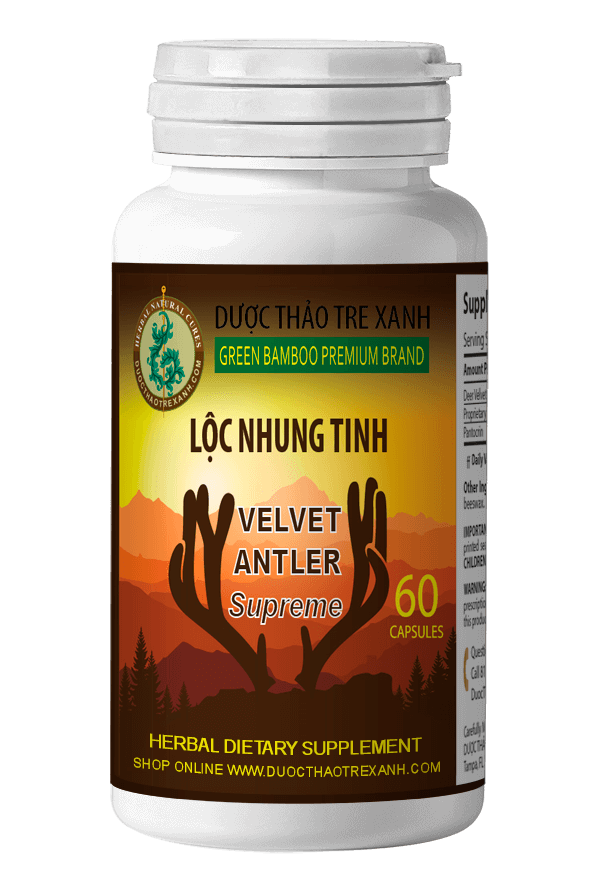 Velvet antler’s health benefits can be simplified under 3 broad categories of restorative, nutritive and rejuvenative.  Daily use of the Velvet Antler Supreme capsules may help replenish and rejuvenate the body.

Over two thousand years of recognition from the east for its Natural benefits, it wasn’t until April 2000 that marked the first time that deer and elk antlers were the topic of discussion by countless medical researchers of the West.  Velvet antler, which is the cartilaginous pre-calcified stage of the fully grown antler or also known as pilose antler, is now undergoing observation from the rest of the world.

Velvet antler supplements have been prized for their health-promoting properties such as, healing and relief of osteoarthritis (degenerative arthritis) symptoms, increasing vitality, and enhancing cardiovascular health to name a few.  Not only has velvet antler become the hot topic of discussion, velvet antler are now receiving strong support and acceptance for their future medical potentials by western scientists.  As velvet antler and all of its natural benefits becomes the rapid study subjects of many nutraceutical research communities, it is our belief that velvet antler will soon become the most sough after nutritional supplement of the world.

With positive results from Australian researchers, velvet antler studies were presented at the Clinical Nutrition Congress in Thailand.  These studies showed that patients, who consumed velvet antler capsules, were relief of their Osteoarthritis disease with no side effects.  These positive changes were found within the affected joints which are not the same effects if one were given pain killers, which only masses the pain but leave the destructive symptoms intact.  Studies show that most prescription and over the counter drugs used to treat osteoarthritis, only attempts to reduce the pains to allow the functioning of the joints.  Unfortunately, these treatments do little to restore the health of the affected joints.  In fact, many of these medications prevent the growth of collagen in joints, causing further cartilage degeneration.  In addition, these drugs may also encourage other serious side effects such as deterioration of the gastrointestinal tract lining, and liver and kidney damage.  Several studies have confirmed that velvet antler can reduce or even abolish symptoms associated with Osteoarthritis.  Clinical tests have also shown that components found in velvet antler such as glycosaminoglycan-peptide complex, chondroitin sulfate, and glucosamine sulfate are affective in helping stimulate collagen repair and inhibits the degeneration of joints.

In the east, velvet antler have been valued for there ability to increase performance of a normal person and athletes.  Studies conducted by researchers showed that subjects who were given velvet antler Capsules increased their vitality, grew faster, and showed less calcium excretion than subjects who were not given velvet antler capsules.  Velvet antler has been used safely for decades in the east as an essential element in the training programs of athletes.  In 1969 it was shown that Pantocrin, another element found in velvet antler, can increase the work load of tested subjects when administered daily.  The Pantocrin found in velvet antlers can help double muscular endurance while also proving to be beneficial in both muscular and nervous system functions.  Clinical trials in 1974 proved that athletes who were given velvet antler Capsules were able to significantly increase their performance in running as well as weightlifting while being less fatigue.  These studies along with studies from New Zealand and studies of other Western University’s of Sports Medicine openly supports the ability of velvet antler to enhance performance, increase strength and stamina, repair injured tissues, and increasing lactic acid removal.  Because of these impressive results, along with other successful studies, velvet antler began to seize the attentions of Bodybuilding Federations and Doctors from around the world.  Today Western sports specialists, medical researchers, fitness personnel and professional athletes turn their spotlight to velvet antler as they seek for a new, safe and legal alternative to the use of synthetic steroids.

Research indicates that the use of velvet antler can also increase cardiovascular health along with regulating of heart rhythm by stabilizing blood pressure and blood circulation.  Weightlifters that were given velvet antler supplements in a double-blind study by the Benedictine University showed astounding results.  In this Research Dr. Craig Broeder found that the group of weightlifters who were administered velvet antler supplements had less fat on their torsos, lower LDG cholesterol levels, greater aerobic capacity, less muscle damage, greater strength, and greater stamina than the group who were given placebos.  The group taking velvet antler supplements also showed significant decline in LDL cholesterol commonly known as the bad cholesterol, which translates into reducing the risk of cardiovascular disease.  Along with this research, two other uncontrolled clinical trials that included 32 patients, revealed evidence that the pantocrin (rantarin) in the velvet antler is an effective natural supplement for lowering blood pressure with no negative side effects.  Additional research and studies have discovered positive correlations between patients who were taking velvet antler supplements and heart attacks.  These studies have suggested that the sulfate, chondroitin, a key element in velvet antler, can reduce the risk of fatal heart attacks and strokes by more than 400 percent when taken daily.  Other studies reported that velvet antler also contained polysaccharides which functions as an agent in reducing blood clots, improving circulations, and decreasing the risk of strokes while boosting cardiovascular health.

Another reported benefit of velvet antler according the principles of traditional Chinese medicine (TCM) is that it can stimulate the Yang and is used for conditions of Yang deficiencies.  Velvet antler is also known for increasing the survival rate of tested subjects that were infected with cancerous tumors while displaying greater results than prescribed anti-cancer drugs.  Studies from New Zealand also found compelling evidence that velvet antler can stimulate the human immune system by increasing its white blood cell production to help defend the body from attacks.  Other studies have shown that velvet antler have been successfully used in healing of epidermal and surgical wounds.

With these overwhelming positive evidence, claims and continued support by Scientist, Universities, Medical Professionals and Clinics from around the world, when will AntlerVelvet become a part of your family’s supplement?